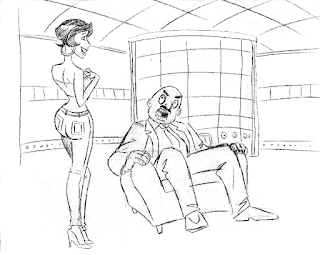 How to Make a Comic Strip, Comic Book and Graphic Novel


Learn to do everything, which means write, draw, color and letter. If there is an opening for a letterer and not an artist, then take the lettering position. It's easier to get jobs from the inside than from the outside.

You don't know what a letterer is? Then it's time to learn some terminology so you don't have a blank look when an editor talks to you. Knowledge is power. Not the power of Greyskull, but enough.

1. PLOT - Written breakdown of the story with significant actions and some dialogue. The artist takes the plot and visually decides the page breakdown and pacing of the story.

2. SCRIPT -  The words; dialogue and captions - that will be used in the comic. There are also directions to the artist concerning the environment, actions, thought process, motivations, emotions of the characters. The script can be broken down in panel by panel form or page by page.

3. DIALOGUE - The words spoken by the characters usually depicted in word balloons.

4. BALLOONS - An area called a balloon which contains the dialogue. A balloon tail points towards the mouth of the character who speaks. The most common balloon is rectangular or oval shaped and called a Word balloon. Burst balloons show when someone is screaming. Double Outline balloons add emphasis to the words. Radio/Electric  balloons show when speech is transmitted through any type of communication device. Telepathic balloons are creatively executed balloons to show telepathy. Thought balloons are made up of bubbles and a tail with smaller individual bubbles. These reveal the thoughts of the characters, but aren't used so much these days. Wavy balloons show the speech of an emotionally or physically distressed character. Whisper balloons are dotted or grayed out to show a character speaking in hushed tones.

4. CAPTIONS -  A narrative device. There are four types used in comics. Reveal location and time of events. Reveal character thoughts. Show off-panel dialogue of character. The narrative of the Omnipotent Observer or a character involved with the story who tells the story - a narrator.

5. OMNIPOTENT OBSERVER - Knows all and tells all to the reader, even things the characters may not know. This is not a character in the story. It's an unknown entity that hovers above it all.


Fonts
Calligraphy
Transform your handwriting into a font on this website.

Writing
How to Write Comics by Alan Moore

If you are interested in further expanding your knowledge, then I recommend these books.

When you purchase a book by clicking the link below, I get a piece of the action and helps me to continue doing this blog. Support an artist today.