Ha was a creator of short stories, anthologies, TV scripts and comic books. He won Hugo and Nebula Awards. He wrote one of my favorite Star Trek episodes of all time, "The City on the Edge of Forever."

There will be other people on the net running down his accomplishments. He is after all one of the greatest writers of speculative and science fiction. I want to share my memory of meeting him.
As I became more settled in my professional career, I started to travel in different circles and get invited to places and parties where I could meet people whose work I enjoyed, admired and respected in my youth.

Unable to speak in the presence of Jack Kirby and Steve Ditko. Surprised that Mark Hamill is speaking to me.( He is much shorter than me.) Saying something stupid to Steranko and later being able to redeem myself. Other times I was able to compose myself and have an intelligent conversation.

I'm not trying to name drop; only explaining my different reactions to meeting people as I move into new circles. I have to save my Larry Niven story for later.

I'm at San Diego Comic-Con where I met a producer of Pinky and the Brain long after it went off the air. After chopping it up for a while, he said he was meeting someone for lunch and invited me to join them. I've had very few jaw dropping moments in my life. This was one of them as he introduced me to Harlan Ellison. The fan boy in me was barely containable. 'I need to handle myself in a professional manner.' We ate lunch and talked. Harlan did most of the talking. Thank goodness! I was spared from saying something that would embarrass me.

He has a reputation for being abrasive and I could see the truth in that rep. We had an enjoyable lunch as that side of him didn't come out. He was very respectful to me. I found him to be a smart, down to earth, "Get off my lawn, you kids." type of guy.

Remember... Just Create!
Posted by Howard at 9:00 AM No comments:

Now I Remember, I Love You

Book cover I painted for a novel entitled "Now I Remember, I Love You"
I tried to evoke the style of those 50s paperback novels.

Here's a sneak peek at some of my art for the soon to be published "Aviation Ace" available from Airship 27. 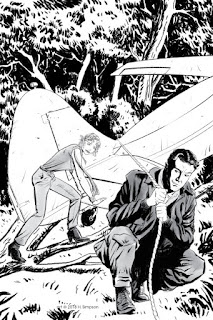 You may find more new pulp at Airship 27 Productions while you wait.

Twitter would have bought DC Comics to it's knees in 1964.

This article could have been titled:
Why comics started showing faceless Presidents or
Good thing Twitter was not around in 1964.

Back to the story. Clark and Superman have to be in the same place, at the same time, on national television. None of Superman's usual tricks are going to work. Who will masquerade as Clark Kent?

Superman gets President John F. Kennedy to dress up as Clark Kent and save the day. Hey, that's cool. Nice story. Unfortunately, the story came out after November 22, 1963. Oh,oh. You have stepped in deep doo-doo now DC Comics. Well, they stepped in it by mistake. This is not a condemnation of DC Comics who did nothing wrong, but was a victim of bad timing.

The letters column in Action Comics No. 312 showed the resulting outrage at showing the beloved dead president. . Whoops, if Twitter had been around in 1964 we would have seen outrage. However, DC Comics chose which letters to print. The public got to read the reasonable, level headed responses. One can only imagine the amount of vitriolic, hate filled, savage and venomous letters they received. The editor - Mort Weisinger - did hint at these type of letters in his response.

In 2018, DC Comics doesn't have this type of control over fans. One could only imagine what the result would be today.


Buying one of the books below will give me a piece of the action and help support this blog.
Support an artist today.

Posted by Howard at 9:00 AM No comments:

Art I created for music CD label for client. I definitely can't sing or play an instrument. However, I was close to pursuing music if not for my mother's impatience.
I was very diligent in practicing my chords. My mother couldn't take it. I came home one day and our piano had mysteriously disappeared.

If you buy an item below, I will get a piece of the action. It will help support me doing this blog. Support an artist today.


This one served double duty and was also part of a portrait challenge. I will show process in a future post.

Posted by Howard at 9:00 AM No comments: 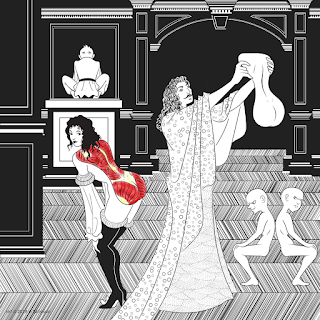 It’s good to wake up in the morning knowing I’m a winner. It’s even better when it’s not me telling myself that. Don’t worry self, I still love you too.

Yes, I’ll also respect you in the morning. Myself is so needy.

Hide the kiddies! This is not for the meek of heart. If you still let your kids see this, you can’t blame me if they are traumatized for life. Well, you can blame me,because I can’t control your actions. But I will only give you a blank stare and wish you ‘good day.’

Wacom has chosen my art for their May Wordplay challenge. My wordplay is visualizing the idiom “I got your back” and a couple of others thrown in for the eagle-eyed among you.

Check out the announcement on their blog.

I encourage my fellow artists to join in; you could be the next winner.

Remember... Just Create!
Posted by Howard at 7:37 PM No comments: